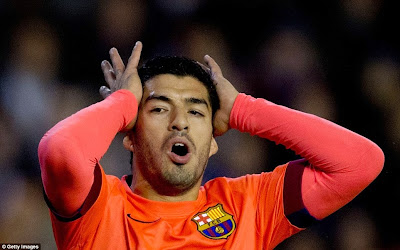 Only one goal since the move to Barcelona
Luis Suarez has not yet managed to break the ice in the Primera Division. Uruguayan striker of Barcelona has checked the fifth game in the league, but so far no goals scored by the striker. In fact, Suarez managed to score after 70 minutes in the last game with Valencia but the goal didn't count as the flag went out for offside. At the end of the match , Barcelona won 1-0, after Busquets goal, and Suarez spoke about the lack of efficacy at Barcelona.

"It's a strange situation, the ball simply does not want to get in the net, although i try as hard as i can. At first the keeper managed to save and than i managed to score and the goal didn't count so i got angry because i knew it wasn't the case for offside. I made a step back just to make sure i was on side, it should have count" said Suarez, who scoared only once so far for the catalans, with Apoel , in the Champions Leauge. Despite the dissapointment, Suarez is firmly convinced that along Messi and Neymar they can get a letal atack for barcelona.

Ligue 1 report after 8 rounds. Bordeaux is the new leader.

Ligue 1 report after 8 rounds. Bordeaux is the new leader.

The big teams in France are having a low start of season, if we are talking about Psg and even more about Monaco.

PSG missed the chance to move up a few places after they only managed to get 1 point from the match with Toulouse, wich ended a draw 1-1 after Ben Yedder got Toulouse into advantage and Bahebeck got the equaliser for PSG.

Monaco had an even worse game in the local derby with Nice wich ended 1-0 after Carlos Eduardo, who is on loan from Porto, scoared the only goal of the match for Nice. Monaco had a horrible start of season and are curently on the 12th spot with only 10 points.
Lille managed to win the game with Bastia after Origi's goal proved to be enough for Lille to secure the 3 points. With this victory they are standing at the top of the league with 15 points, 2 points behind the current leader Bordeaux.

Bordeaux could have taken the first spot in Ligue 1 if they were to beat Rennes and they almost missed that chance. Khazri gave the lead for Bordeaux in the 74th minute of the match but Habibou got the equalizer 6 minutes later. The game was almost over when Toure got the wining goal in the third minute of the added time shown by the referee securing Bordeaux's win after a thrilling game.. With this victory, Bordeau takes down Marseille from the first position and acumulates 17 points, 1 more than Marseille.

Marseille meets tonight St. Ettiene and if they will win then they will take back the first position and also a serious option for winning the title. 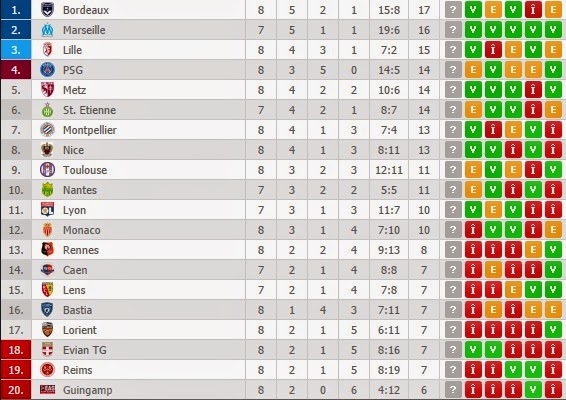 Mario Balotelli was just transfered from AC Milan to Liverpool and he has allready made an impact in a way or another. He recently posted a short video on his instagram acount showing him inhaling helium from a balloon and singing Liverpool's name.
The scene happened in a friend's car and as we can see and hear from the video they were having a great laugh about Mario's funny singing.
Mario also posted a message for his fans "And for all the supporters and for my fans and for my followers on Instagram I say tomorrow:- LIVERPOOL LIVERPOOL LIVERPOOL!!!! #eliovoice lol"
You can watch the video bellow and laugh yourself.and if you want to follow Mario on instragram you can do it here. http://instagram.com/mb459

Philipp Hofmann had a terrible miss in his last match. Kaiserslautern still won 1-0 with Union Berlin.

Philipp Hofmann had a terrible miss in his last match. Kaiserslautern still won 1-0 with Union Berlin.

He is 21 years old and is one of the great hopes of German football . Moreover, in the last match of the national youth scored a hat -trick. It happened in that 8-0 nightmare game for Romania's national under21 team , recorded two weeks ago. Philipp Hofmann gave four goals in two matches against the youth national team of Romania , but the last match was not good for him. Kaiserslautern 's Kid offered an incredible miss in the last match of his team, sending over the net from about 2 meters. The goalkeeper was trying to block the cross and Hofmann only had a simple formality to accomplish but he couldn't hit the ball as he wanted.

Kaiserslautern still managed to win 1-0 against Union Berlin, thanks to the Alexander Ring's goal. Hofmann played 31 games last season for Ingolstadt , scoring 8 goals . In this season, the striker has scored once in seven games. 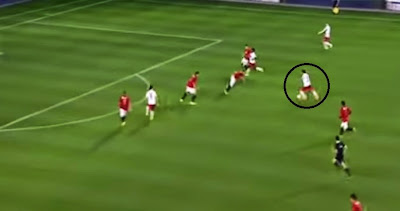 Last night Dinamo Bucharest played a cup match against Fortuna Poiana Campina on "Ilie Oana" stadium from Ploiesti city 60 kilometers from Bucharest. It prooved to be a tough match even if Fortuna is in the second league and after 90 minutes it was even 2-2. Cionac(51min) scoared the first goal, who is Dinamo's player but it is on loan to Campina but Rotariu got the equalizer 10 minutes later. Rotariu scoared again after 2 minutes so Dinamo was leading but it wasn't enough because Munteanu scoared the equalizer for Campina in the 71 minute. It went in extra-time were Dinamo scoared after only 1 minute when Bilinski took his chances by scoaring an important goal for his team. It was 3-2 but it didn't seem enough for Bilinski and after receiving a ball from Collins Fai he find the space and with good timing he got a powerful shot from range and he scored again with a great execution for 4-2(96 min). It finished 5-2 after Rotariu completed his hattrick ten minutes before the end of the match. Watch Bilinski's SUPER GOAL scoared for Dinamo Bucharest
Publicat de Cristian la 08:56 Niciun comentariu:

Liverpool won the Cup League's match against Middlesbrough after 27 penalties. 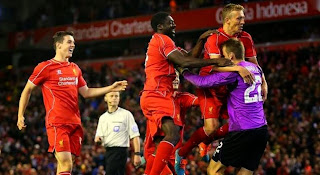 Liverpool won the Cup League's match against Middlesbrough after 27 penalties.
Liverpool won the League Cup match against Middlesbrough after a crazy match with 30 goals scoared. The match started well for Liverpool and after 10 minutes it was 1-0 after the goal scored by Rossiter . After the break Boro got the equalizer when Reach managed to score after 62 minutes. After ten minutes Lambert was replaced with Mario Balotelli but nothing happened until the end of the first 90 minutes.The first half of extra time ended without goals but the second half scenario had a different outcome .

Suso got Liverpool into advantage once again (109) but it wasn't enough because in the extra-time of the extra-time Boro got a penalty and Bamford got the equalizer and the winner had to be decided after penalties. Balotelli didn't miss Liverpool's first shot but Bamford, the author of the late goal of Boro did miss and Liverpool had the first chance now. All players that follow scoared and it went to the third series of penalties. Even the goalkeepers had the chance to score and they did. It was Sterling's time to miss the decisive penalty and Liverpool won after 27 penalties and only 2 misses. The penalties in Liverpool-Middlesbrough 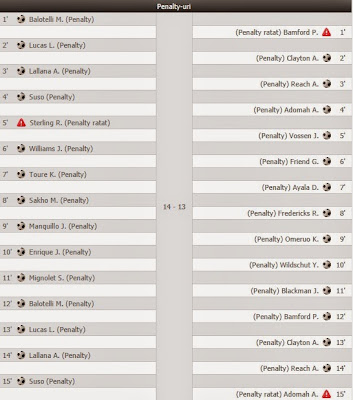 Pablo Hernandez scoared a super goal for his team, Celta Vigo, against Atletico Madrid. After 19 minutes the central midfield who was transfered this summer from O'Higgins(Chile) scoared a fantastic back-heel goal like Ibrahimovic does. At half time it was 2-1 for Atletico after Miranda and Godin scoared but it wasn't enough because Nolito scoared from penalty giving Celta the equaliser.